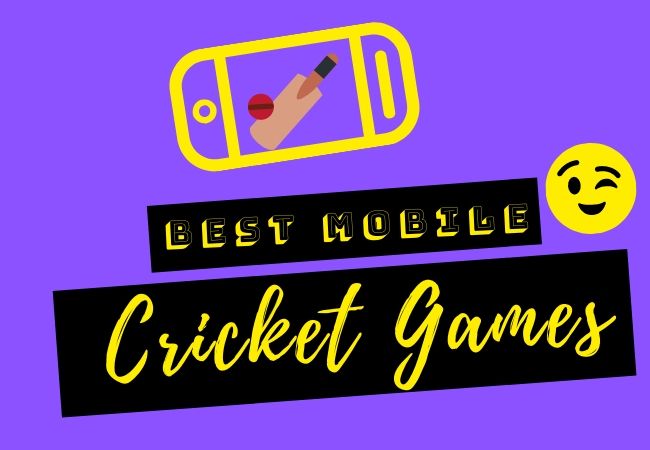 Mobile games always were a source of fun and entertainment in every boring moment and your favourite companion in long journeys. No wondering, mobiles games are extremely engaging and entertaining at the height of addiction. It is the reason why most people tend to stick with their phones most of the time.

In contrast, cricket is a sports game which is extremely popular worldwide. People follow cricket like a religion. And, with the emergence of mobile cricket game apps, this has added fuel to fire making the cricket game apps a rage. Perhaps, you’re also the one who follows cricket at the hardcore level. Subsequently, you might want to experience the same thrill and adventure similar to a live cricket game. Therefore, there could be no better way to play cricket other than on these smartphone cricket apps. While playing cricket in real is close to impossible in our busy life. These mobile cricket games make sure that your passion for the cricket game stays alive.

What are the Best Mobile Cricket Gaming Apps?

While, there are tons of cricket game apps, but we have picked and compiled the list of only best and top performing cricket games. These games hands-over a realistic and unmatched experience. Hence, take a look at these cricket game apps.

The game is updated version of World Cricket Championship. WCC is absolutely stunning and has amazing graphics as compared to the previous version. World cricket championship starts with the developer screen name which is “Nextwave Multimedia”. There are several menus to choose to range from selecting tournaments, quick play, practice sessions, and settings or customization menu.

In order to play a tournament, you need to unlock them by paying coins and completing various game levels. When in quick play code, you have to pay coins each time you select a match. The minimum one costs 100 coins. Hence, the game is clearly designed to monetize every single screen. To get coins, either you have to make an in-app purchase or watch unnecessary ads.

Talking of gameplay, player faces and their names are not anywhere near the realistic ones. Commentary while the match is played sounds way out of the gameplay. Some actions are repetitive like players cheering each other while the gameplay.

The awful thing is fielders sometimes leave the ball despite being close to the ball. Batting is easy to do but the terrible part that your bot opponent while batting can come down to the pitch, while you cannot. There is not much to do as a batsman. Overall, the game is an average one. Moreover, the ad between the games makes it really bad experience.

There are some good elements which make the game interesting. Elements like DRS review, ball tracking, and award ceremony adds an awesome touch to the game. In, our opinion, the game is a simple one-time play option.

Another cricket game on our list is a casual graphic game. The game resembles a 2D game but has some elements of 3D as well. Stick cricket is an excellent choice for casual gamers and for time killing moments.

The gameplay is quite smooth compared to other games on the list. There are very few ads while playing. When you start playing you can choose from different menus such as inside edge performance centre, All-star slog, World domination, World T20, World Cup as well.

The gameplay is entirely static and there is hardly any movement of players except bowler, batsmen, and the umpire. The only elements that move are bat, ball and sometimes player. The game is way too repetitive and very hard to score runs. You just need to predict which way the ball is going to come. Your prediction will determine, whether you have to click the right side or left side button. Scoring is extremely hard and you have to make all out to get some runs.

It is great for beginners and has very few ads that are a wonderful thing. Apart from it, you can play multiple tournaments and leagues without any boundation.

Perhaps this is the best cricket mobile game on the Google play store. The game has fascinating graphics which looks amazing on the phone. Some of the detailing are really well such as toss, national anthem, expert discussion, and count down before the game begins.

Real Cricket starts with a login screen where you have three option to log in with Facebook, Google play ID, and as a Guest. The game is overall smooth, and doesn’t have any hovering ads while you make your way choosing the players and team.

The characters are designed to look close to the real ones. While you login, you get a daily bonus of coins which later can be used to buy sports gears.

There are numerous tournaments available unfortunately they are locked and you have to purchase them before you can play. You can play a quick game and a test match without the need to make a purchase.

The controls are exceptionally amazing; you can target any of the sides where you want to play a shot just by fixing the joystick in that direction on the left side of your screen. There are 4 clickable buttons on the right side of the screen where you can choose to play on the back foot, front foot, advance shot, and also can leave the ball. In order to decide what kind of shot you want to play, choose between push, lofted, and stroke option.

The game is pretty easy to play but can get a little boring later as you have to keep batting for 10 overs and there are multiple ads at the end of every over. To reduce the number of overs you have to make a purchase as it is locked by default.

The gameplay is comparatively better than other 2 former cricket games and you get more chances to score run.

Bowling options are not that bad but can get slightly better.

The gameplay has good graphics and there are few ads only at the end of the over so you can focus better on the game. Final verdict about the game suggests it is the best of all cricket game.

Tags:Cricket Games
previousGame Awards 2019: The Complete List
next30 Casual Easy Games of All time You Must Try